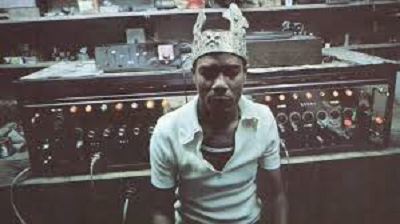 Catch the King Tubby Special here
all that is left from the original vocal cut is - 'you don't have to run...' and 'all that your love needs....say so'-
This fragmentation is seen clearly on the classic 'King Tubby Meets The Rockers Uptown' from the same album, where Jacob Miller's 'Baby I Love You So' is left with just '...baby I've...' and 'that love...' as the dub floats through the mix, and the snare is a powerful full stop allowing Tubby to reintroduce the riddim and allowing the chordal instruments and Augustus Pablo's haunting melodica to float in and out.
A dub masterpiece -
This technique, done live in real time at the mixing board, transforms the lyrics into a pathogenic sound - a pureness of sound arising from the emotions.
It may be that is what, and why, dub music has had such a powerful impact on the listening ear. It connects directly to the cerebal cortex in ways other music doesn't - leaving us guessing at what is left out.

'the shackles and chains must be broken...and who still of those, that were stolen...what about the half, the half that never been told?' - in the haunting 'King Tubby's Key' dub from 1977 which still leaves the meaning of the original crystal clear:
Tubby was a true pioneer - he brought in non-musical material from the studio into his mixes - here the master tape is caught in the mix coming up to playing speed with some random piano work right at the start of the 'Fittest of the Fittest', itself a monstrous dub to Barry Brown's original -

and in the powerful 'Beware Dub' from 1978 with Yabby You, Tubby is given a shout-out by Yabby as the chaotic studio sounds are caught at the start -
Not one to be afraid to innovate he famously would drop his spring reverb unit to produce a violent and clangorous sound, pushing the studio equipment to its limits.
Here in ' A Heavy Dub' from 1975 a reworking of Delroy Wilson's 'Just Say Who' the reverb is given a real pasting to create the sound Tubby wanted -
He made his own amps and was renowned for the quality and power of his electronic work.
His own amps were chrome delights, and atop of them was a mesmerising display of red, gold and green lights when he played out.
He also used delay on his amp at dances, the first soundman to do so.
No-one had an amp which could do this, and Tubby kept his secret hidden by disguising a three head cassette deck.
His sound was so popular in the early 70s and he tried the dub plates and sound techniques out first to gauge the crowd response.
Having U-Roy as his DJ meant the crowd was always rocking at a Tubby dance, an example of one has been caught, where you can hear U Roy chatting over the mix and Tubby is in full effect deploying all his electronic wizardry.
Bear in mind this is a 1975 recording made from a tape, but is a true slice of musical history -
Tubby was the first to use separate amps to boost different frequency ranges, and the first to use reverb and echo to enhance the dance experience, his innovation as a sound man was brought to an abrupt halt at a dance in Morant Bay where a hostile policeman shot up Tubby's famous chrome amp.

By then though Tubby brought what he had gleaned from the dance back into the studio, set up in his bedroom, literally, at 18 Dromilly Avenue, Waterhouse, where from 1971 he had been building amps, and where he voiced and cut dub plates with Bunny Lee, before upgrading in 1972 by acquiring a MCI 4 Channel deck which he customised and by using its high-pass filter began to create his own distinct sound.
By 1973 he was working with the equally legendary and innovative Lee Perry, and with whom his early work shows the breadth of his creativity - like this, produced by Derrick Harriott -

and of course the seminal 'Blackboard Jungle' also from 1973, where Tubby and Perry produce one of the best dub tracks ever -
His association with various producers, like Perry, Linval Thompson and Bunny Lee meant he was in high demand, cutting upwards of 200 dub plates a week, according to Philip Smart. It was with Bunny Lee that he made some of his most powerful roots dubs, with the 'flying cymbal' sound beloved of so many roots reggae lovers, the sweeping sound obtained by using the high pass filter and the splash from the offbeat hi-hat cymbal.
Two albums resulted from this link up in 1974 - 'The Roots of Dub' and 'Dub from the Roots', and the flying cymbal sound can also be heard in Tubby mixes of 'Niney the Observer' material from this time -
The twanging sound Tubby got from chopping his reverb unit is also shown in 'Marcus Dub', a reworking of Johnny Clarke's 'Them Never Love Poor Love Marcus', an ode to Marcus Garvey -
Having no facilities to record live music in his studio, Tubby worked with younger producers remixing and add voice to master tape material that they had, the upgrade of Tubby's studio to a full-fledged remix facility allowed Tubby to develop the style which made dub popular, and in turn reflected the studio's surroundings, where younger engineers like Prince (later King) Jammy, Philip Smart and later Scientist all learnt their trade at the Tubby's desk.
He had a great love of jazz and to some he treated the mixing desk as an improvisational instrument remix in real time.
He made darker, minimal mixes which were stark, moody and suspenseful. This in turn reflected the socio-political landscape of Waterhouse at the time - later to be known as 'Firehouse' - it was a turbulent place, with gun fights going on until dawn.
The introduction of sirens, machine gun, brake noise and other noises into the mixes, aswell as the use of 'Straight to X Head' in the titles shows that Tubby's music was very much of the turbulent world he lived in.

Yet he used cutting edge techniques to remix some of the heaviest riddims to express the Jamaica of that time  -
He released albums in his own name, but his collaborations were what he is most famous for - whether with Yabby You in 'Prophesy of Dub' from 1976 or 1974's 'King Tubby Meets The Upsetters At The Grass Roots of Dub' where he spars with Lee Perry, or the much acclaimed 'King Tubby Meets Jacob Miller' from 1975 Tubby's work stood out and he built his reputation by doing things others couldn't or wouldn't dare to.

This from the 'King Tubby Meets The Aggrovators At Dub Station' from 1975 has an intro which builds and builds, sounding like a theme to a Spaghetti Western, before Tubby brings in the drum and bass and the whole thing just explodes into a sonic maelstrom -
His work with Harry Mudie, a producer feted for introducing a whole strings orchestra into reggae is truly astonishing. The three albums they released together from 1976-1978 show a different side to Tubby and brings together his love of jazz and his electronic wizardry to make this dub cut to Jo Jo Bennett's 'Leaving Rome' an all together deeper sound than the original but still displaying the sonic softness Mudie brought to the desk -
By the late 70s Tubby was mixing less and left much of the studio work to his younger engineers - like 'Prince Philip' Smart, Lloyd 'King Jammy' James and Overton 'Scientist' Brown who had started working at Tubbys' from 1978. Scientist was hired initially to wind transformers, and worked at Tubbys' until 1983 before he moved on to work at Channel One Studio.  He recalls how he got his name from Tubby, who apparently said, of his work - 'this little boy must be a scientist'. Before Scientist left Tubby's Studio, he mixed many albums, and we can see how Tubby's Studio had moved musically by the time this was released in 1979 -
Scientist went onto become a dub legend in his own right and his story is another still being made. Into the 80s Tubby focussed more on his own labels, like Firehouse - and capturing the zeitgeist had a massive hit with the first digi-roots tune with Anthony Red Rose's Tempo in 1985 -
However, by this time Tubby was focussed on building a bigger 24 track studio in his house so he could offer an all round production facility. He made more dancehall digital records, like this from 'King Tubby Presents Soundclash Style' in 1989 where, using Fuzzy Jones and various artists to create a dancehall feel. As he said on the album's notes - “The album is the first of its kind. The purpose is to give those people who don’t attend dances a feel what is happening inside the dance hall…”. His mixing work had all but ended.
King Tubby was tragically shot dead outside his house by unknown gunmen in what is thought to have been a botched robbery on 6th February 1989.
He has left a legacy, and his influence can be felt across all genres of music, there would not be dubstep, jungle, EDM, techno, electro, hip-hop, trip-hop, broken beats, drum and bass with Tubby, and his innovative techniques paved the way for others.

Considering where he came from, what he achieved is nothing short of miraclous.
We will be presenting a King Tubby Special, live on 31st January 2021 to mark what would have been his 80th birthday.